From Bainbridge Island to the White House -- BHS Alumni Ben Harris shared how he achieved his dream.

It's always fun to see old friends return to BISD! As part of the Alumni Speaker Series at BHS, Ben Harris, class of 1995, stopped by and shared his journey on how he went from Bainbridge Island to the White House.

Ben served as the Chief Economist to Vice President Joe Biden and now serves as Chief Editor of the Biden Forum (see his bio below). Ben shared his struggles in achieving his dream and acknowledged the important role mistakes and rejections had along the way. His story was filled with humility, humor and inspiration. And as a special treat, his senior photo was on display! 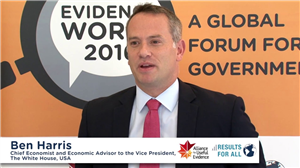 Ben Harris recently served as the Chief Economist to the Vice President in the Obama Administration. He is currently the Executive Director of the Kellogg Public-Private Interface at Northwestern University's Kellogg School of Management, the Chief Economist for Results for America, and the Chief Editor of the Biden Forum.

Following his tenure at the White House, he was a senior economic policy adviser with the hedge fund Rokos Capital Management.  He was also previously the Policy Director of The Hamilton Project at the Brookings Institution; a Fellow in Economic Studies at Brookings; and Deputy Director of the Retirement Security Project at Brookings.

Earlier in his career, Harris was a Senior Research Associate with the Urban Institute and the Urban-Brookings Tax Policy Center. Prior to joining the Urban Institute, Harris worked at the White House as a Senior Economist with the Council of Economic Advisers, where he specialized in fiscal policy and retirement security. He has also served as a Research Economist at the Brookings Institution and as a Senior Economist with the Budget Committee in the U.S. House of Representatives. Harris has also taught as an adjunct professor at the policy schools at the University of Maryland and Georgetown University. Harris’ primary areas of focus are tax, budget, and retirement security. He has published a variety of papers and policy briefs related to topics in public finance and is regularly cited in media reports related to fiscal policy.