The salmon have hatched!

Tuesday, January 21st was the day that the salmon began to hatch!  They are now in the alevin stage which is characterized by the yolk sac that is attached to their bodies. 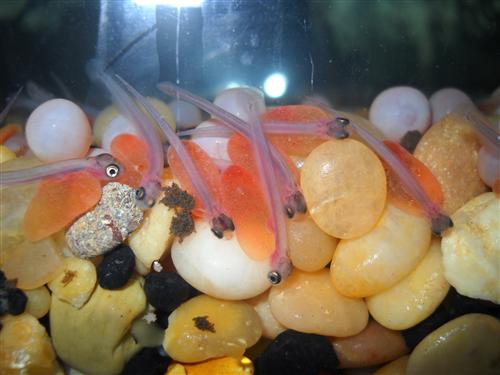 Chris and Cole shared the following salmon report on the broadcast:

COLE: And we are here with the VERY FIRST salmon report!

CHRIS: And we are happy to report that…

COLE:  The salmon HAVE hatched into ALEVIN!

CHRIS:  Or you can also call them “Alvin” like the Chipmunks.

CHRIS: If you go up to the tank today, you will see them sticking their heads in the gravel!

COLE: This is perfectly normal behavior for salmon.  Even though there are no predators in the tank, their salmon instinct tells them to hide!

CHRIS:  If they were out in the stream, they would be hiding in their salmon nest, which is called a REDD.

COLE:  It would be dark under the gravel so that is why we ask that you only peek underneath the black cloth for a few seconds.

CHRIS:  Other kids from our class will be back next week with some more cool salmon facts!

COLE: Thanks for listening!